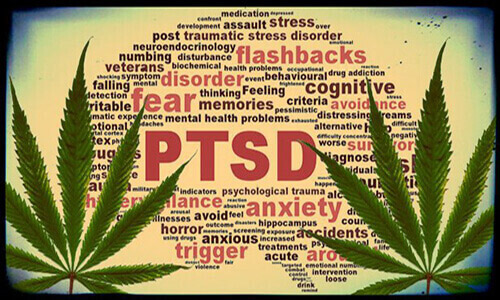 PTSD occurs in people who go through extreme emotional trauma involving a perceived threat of death or severe injury. It is a debilitating disorder that causes a person to relive the traumatic event in the form of nightmares or disturbing visual flashbacks throughout the day. Other possible symptoms of PTSD include, but are not limited to, anxiety, depression, emotional numbness, insomnia, aggressiveness, or irritability.

PTSD is most often associated with veterans who experienced extreme brutality in war, but it can also be brought on by traumatic events such as rape, physical assault, car accidents, or any other devastating experience that throws a person into a state of shock. A person can also develop symptoms of PTSD from trauma of mild to moderate stress that is chronic or common in occurrence, such as the stress experienced by individuals with chronic and debilitating illnesses.

Often, PTSD is treated with psychiatric medications. However, these often fail to work, especially in individuals who have experienced repeated traumatic events. Results of a six-month study on the effectiveness of Risperidone, the primary antipsychotic medication used to treat PTSD, showed the drug works no better than a placebo at treating symptoms of PTSD.
[source 1].

Aside from antipsychotics, standard treatment for PTSD includes the use of antidepressents. Paxil and Zoloft are the antidepressants most commonly used to treat PTSD, and they often prove unsuccessful and/or cause a worsening of suicidal symptoms. Clearly, other avenues of PTSD treatment are desperately needed, and research shows cannabis may be one of them.

The Connection between the Endocannabinoid System and PTSD

The medicinal properties of cannabis largely stem from the plants’ ability to interact with the body’s endocannabinoid system, which is located throughout the body and is composed of neuromodulatory lipids and their receptors.

The endocannabinoid system is inextricably connected to memory functions in the brain, specifically that of “memory extinction.” Memory extinction is the normal process of removing associations between past events and stimuli in healthy, properly functioning brains. However, this function is not properly carried out in those with PTSD, which is why individuals with PTSD continue to respond to stimuli reminding them of the initial trauma, even when such a response is no longer appropriate or a direct threat is no longer present.

According to the Israeli scientist Dr Raphael Mechoulam, cannabis might be the missing link needed for those with PTSD to recover because of its ability to aid in the process of memory extinction and ultimately diminish the brain’s association between past trauma and stimuli such as certain noises, stressors, or aesthetics of the external environment.
[source 2].

In an experiment conducted on mice, Mechoulam demonstrates how cannabis does so by activating the endocannabinoid system.

Animals who are electrically shocked after hearing a particular noise will forget about the shock and the trauma surrounding the noise within a few days of repeatedly hearing it without the initial simultaneous administration of an electrical shock. However, mice without active, properly functioning endocannabinoid systems never forget the association between the noise and the electrical shock, even when it ceases to occur with the noise. A negative block linking the noise to the trauma of the electrical shock exists indefinitely, similar to how those with PTSD continue to link stimuli to the trauma they lived through despite the passing of time. Cannabis resolves this by interacting with the endocannabinoid system to aid in memory extinction, thereby reducing response to stimuli related to the past traumatic event(s).

Specifics on what strains of cannabis are best for treating PTSD have yet to be properly identified in studies. This could be because all strains are beneficial to some degree, but is most likely because studies on using cannabis to treat symptoms of PTSD were relatively nonexistent until recently. Other studies on cannabis and PTSD are still being conducted, and strain specifics will likely emerge as the results of more studies do.

3. ”Cannabis for Lyme Disease and Related Conditions: Scientific Basis and Anecdotal Evidence for Medicinal Use”: www.cannabisforlyme.com.