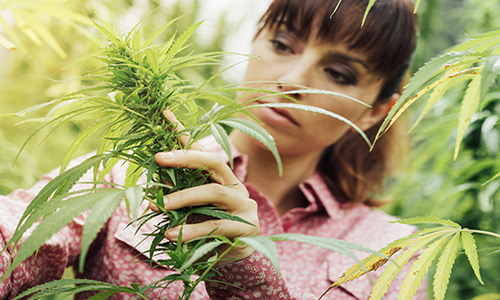 Israeli researchers have once again confirmed the healing potential of marijuana (cannabis), a natural, medicinal plant loaded with dozens of disease-fighting cannabinoids and other beneficial compounds. A recent announcement by American Friends of Tel Aviv University (AFTAU) explains the findings of a new study published in the Journal of Neuroimmune Pharmacology (JNP), which demonstrates the ability of marijuana to fight multiple sclerosis (MS) without triggering harmful side effects.

An inflammatory disease in which the immune system attacks the central nervous system, MS is a debilitating condition that in more extreme cases can lead to numbness of limbs, loss of vision and even paralysis. Some 2.5 million people worldwide are believed to be suffering from the condition, which has no known or admitted cause, and conventional medicine has thus far been unable to come up with an effective remedy or cure.

But Drs. Ewa Kozela, Ana Juknat, Neta Rimmerman and Zvi Vogel from Tel Aviv University’s (TAU) Dr. Miriam and Sheldon G. Adelson Center for the Biology of Addictive Diseases and Sackler Faculty of Medicine may have uncovered a potential natural cure for MS: marijuana. Since marijuana contains natural anti-inflammatory compounds that support the body’s built-in endocannabinoid system, it is a powerful tool in the fight against a whole host of chronic diseases, including MS.

According to an announcement issued by AFTAU, Dr. Vogel, who helped author the new study, was among the first to identify marijuana cannabinoids, for which there are some 70 different varieties. Among these cannabinoids is cannabidiol, or CBD, which is said to be the most plentiful and potent cannabinoid in marijuana. Cannabinoids in general have been extensively researched by independent scientists in recent years, because they offer incredible medicinal benefits without the “high” produced by tetrahydrocannabinol, or THC.

But in this case, Dr. Vogel and his team demonstrated that both CBD and THC are capable of effectively reprogramming damaged immune cells so that they do not attack the brain and spinal cord. After extracting immune cells from mice paralyzed with MS, the team administered CBD or THC, both of which were observed to restrain these immune cells from further producing the inflammatory molecules responsible for causing MS.

“The researchers took immune cells isolated from paralyzed mice that specifically target and harm the brain and spinal cord, and treated them with either CBD or THC,” explains AFTAU. “They concluded that the presence of CBD or THC restrains the immune cells from triggering the production of inflammatory molecules and limits the molecules’ ability to reach and damage the brain and spinal cord.”

This substantiates earlier research conducted by Dr. Vogel back in 2011, which found that CBD specifically can help prevent immune cells from attacking the myelin sheaths, or the protective covers, of nerve cells. Researchers at the time injected CBD directly into the paralyzed mice, which were observed to quickly regain healthy movement. These same mice eventually learned how to walk again without a limp.

“When used wisely, cannabis has huge potential,” says Dr. Kozela, who also worked on the new study. Dr. Kozela had previously studied opiate compounds like morphine, which are derived from the poppy plant. “We’re just beginning to understand how it works.”

To learn more about how marijuana can support your body’s endocannabinoid system, be sure to check out this thorough introduction from licensed osteopathic physician Dustin Sulak, D.O.: http://norml.org.

You can also check out our earlier reports on marijuana, including this powerful report about how juicing marijuana leaves can help reverse chronic illness:
http://www.naturalnews.com.

References for this article include: