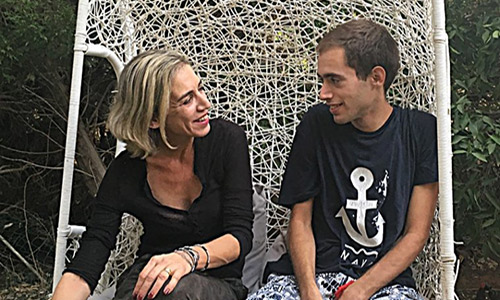 “People who don’t live severe autism can’t really understand what it means. It’s life in the shadow of hell,” says Israeli Abigail Dar, mother to 23 year old Yuval, who began showing signs of autism at the age of 18 months.

Yuval is one of a growing number of children being diagnosed with autism, which according to the World Health Organization affects 1 in 160, a figure that rises to 1 in 68 in the United States.
Generally manifesting between 12 and 18 months, autism is characterised by difficulties in communication, an apparent inability to form human relationships, an unusually limited range of interests, and abnormal sensory issues.
At the severe end of the spectrum, it is also often accompanied by intellectual disability, self-injurious tendencies, violent outbursts, high levels of anxiety or obsessive compulsive behaviour, and in 30% of cases, epileptic seizures.

Like most parents, as Yuval’s condition worsened, Abigail and her husband put their faith in the pharmaceutical treatment options offered by the medical profession.
“Yuval is very restless and has a lot of anxiety, so when he was 12 years old we started giving him antipsychotic medication on the recommendation of his doctors. But he just became worse and worse. By the age of 17 he got epileptic seizures so we had to add epileptic drugs. And he also became when he was around 17 very self-injurious, biting himself until bleeding. And sometimes very aggressive towards his carers or towards me.”

Convinced that the antipsychotic drugs were worsening Yuval’s condition, they decided to seek alternative treatment, finding anecdotal reports that autistic children responded well to medical cannabis.
Living in Israel, the Dars are lucky enough to reside in a country that is at the epicentre of research into medical cannabis. Indeed, the scientist considered the biggest trailblazer in the field, Raphael Mechoulam, is in fact Israeli. Israel’s Department of Health includes a Medical Cannabis Unit, whereby patients with qualifying conditions such as epilepsy, Parkinson’s, and MS can obtain a permit to use medical cannabis.
Despite this, in Israel autism is not an approved qualifying condition and doctors are on the whole unwilling to prescribe cannabis.
“When I started with Yuval, I had to appeal and he got his medical cannabis card under a mercy treatment. I mean they had no mercy giving him all these anti-psychotic drugs, but in order to get the cannabis he had to qualify for mercy treatment.”

However, as soon as Yuval began taking medical cannabis, the effect was immediate.
“It was like magic. My son became a calm person, more concentrated, having a smile on his face. And over a year, he didn’t show any self injurious behaviour or any outbursts, which for me and for him is a miracle. It was life changing.”
Like many parents of children whose lives have been transformed by cannabis, Abigail decided to take action so that other severely autistic children could benefit from medical cannabis. She began campaigning to get autism recognized as a qualifying condition.

Along the way, she met the researcher Adi Aran from Shaare Zedek Medical Center who had already been granted approval for the first ever clinical study into autism and cannabis, and the two began working together.

Abigail had already seen how Yuval responded better to the whole cannabis plant containing all the active compounds, as opposed to single molecule extracts. She was concerned that the study’s efficacy would be limited by the common financial pressures associated with clinical research, which tend to favour more easily patentable, single cannabinoids.
“It’s going to be the first clinical research about cannabis and autism. And it must work, because if they gave clean CBD or isolated cannabinoids, and it didn’t work for autism, it would be devastating because people wouldn’t bother to read exactly what they gave. They would just read cannabis doesn’t work for autistic people.”

This belief in the necessity to test the whole plant has led Abigail to launch a crowdfunding campaign.
“We have to fundraise at least $30,000 and with any additional amounts we can do more groups and more strains and really check it thoroughly for whole plant and learn what really works better for them.”

In the meantime, Yuval’s progress continues to delight Abigail and her family.
“This is the person, this is my son without all the distractions that come along with the autism. He’s even started typing, saying what he wants. He typed today ‘I’m becoming more independent’ – which is ‘whoah.’ We’d done so much work with him, but he’s never been able to communicate his wants and needs before.”
For more information about Abigail’s campaign – Generosity