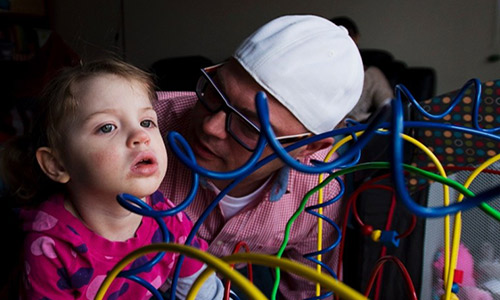 Alex Repetski is your average dad, but to his three year old daughter, Gwenevere, he could be a hero. He’s spent the last 18 months and more than 800 hours reading through studies and medical journals, researching CBD and its healing properties, to help her with the tonic, myoclonic, and clinical seizures she was having — sometimes up to 50 a day. She was diagnosed with epilepsy and, as her EEGs revealed, was experiencing constant subclinical seizure activity throughout the day. It may not have looked like she was having a seizure from the outside, but at the brain level there were neurons firing constantly, and such activity can produce significant brain damage.

Gwenevere had a team of doctors that were trying an array of medicines to reduce the number of seizures she was having each day. At one point she was on 9 different medications. They kept hoping each subsequent medication would work, but nothing did. That’s when Alex decided to look into cannabis oil. “At that point, we really didn’t have anything to lose,” he said, as he recalled the struggle of trying to help his daughter achieve a better quality of life.
At first it was difficult to get her doctors on board with cannabis oil as a treatment since, admittedly, they simply didn’t know enough about it to prescribe it. Alex mentioned they considered trying the ketogenic diet after the ninth medication failed, but opted to try cannabis oil instead. Determined to understand what was happening with Gwenevere and help her as best he could, Alex read every journal publication, paper, article, study, and trial he could get his hands on regarding cannabis oil. Armed with research and studies in hand, only one of Gwenevere’s doctors agreed to prescribe cannabis to him, based on the trust and faith he had in Alex’s time spent researching.

At the time that Gwenevere was going through this process, Canadian law still stated that it was illegal to change cannabis from its dried form, meaning that if it is to be used for medical purposes it must be smoked or vaporized. It’s been reported that taking cannabis in its oil state has the most therapeutic value, however, and asking a child to smoke is ridiculous, for obvious reasons. The law changed last year after the notorious case involving Owen Smith, who challenged the Supreme Court that cannabis should not have to be smoked. He won the case, and the word ‘dried’ has been removed from the legal definition of acceptable cannabis usage, allowing for both oils and edibles to be prescribed as well.
After acquiring the cannabis and reducing it down to its oil form, Alex proceeded with many rounds of trial and error, trying to find just the right dosage for Gwenevere. After five days, they noticed no seizure. Then another week went by, and then a month, and then two months of no seizures. Last January she went in for her 17th EEG after being on cannabis oil for 5 weeks.

This EEG was strikingly different from her previous ones. It seemed the cannabis oil had helped straighten out her brainwaves, working at the subclinical level. This was a huge moment for the Repetski family. Alex recalled taking the EEG to Gwenevere’s doctor to get an analysis and seeing how shocked they were when they saw it. At that point, he tells us, he couldn’t help but give the doctor a hug out of sheer joy!

They know this is not a cure for Gwenevere, but her quality of life has increased dramatically, which also increases the quality of life for the whole family. Prior to the cannabis oil use Gwenever was in an almost vegetative state and was functioning at the level of a four month old baby, even at the age of two. Now, she is a thriving three year old that is ticklish and likes smashing things and playing with her family. Alex is the first one to admit that he doesn’t see cannabis oil as a magic elixir, because much research still has to be done. However, he does wish to see a greater dialogue open up between all channels of healthcare, government, and citizenry about the use of cannabis oil as one more treatment option doctors can look towards when prescribing medications for patients.

There is still quite a bit of confusion surrounding the idea of taking cannabis oil and ‘getting high.’ Cannabis oil used medicinally is comprised almost entirely of CBD and very little THC (the component in cannabis that makes you feel high). CBD is one of over 60 compounds found in cannabis that belong to a class of molecules called cannabinoids. CBD and THC are usually present in the highest concentrations, making them the most recognized and studied. But it’s important to keep in mind that CBD and THC levels vary in different plants, so cannabis grown for recreational purposes will contain higher levels of THC than CBD. Using the oil as a treatment option is not the same thing as giving your child drugs.