8 ways hemp can keep you healthy 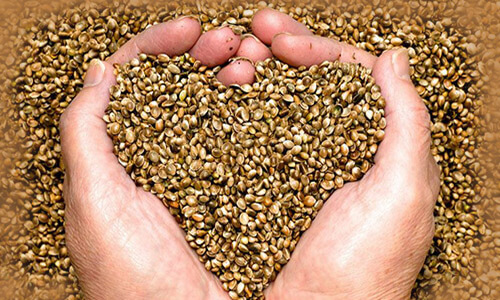 Hemp truly is a miracle plant. Aside from being an amazing, sustainable fibre for clothing and building material, the seeds can also provide the body with some amazing health benefits.
Here are 8 ways that hemp can help keep you healthy!

While hemp barely contains THC — the chemical that gets people high — it does share many of the other plant compounds, most notably cannabidiol. Also known as CBD, this cannabinoid has been shown to have many health giving properties. CBD is found in the flowers, stalks, and leaves, but not the seeds of the hemp plant.
There have been some high profile cases of children with rare forms of epilepsy who, after taking cannabidiol made from hemp, have reduced their seizures from hundreds a week to almost zero. In the UK it has recently been reclassified as medicine and is under review by the Medical Healthcare Regulatory Agency (MHRA), while in the United States its legality varies state by state.

January is the month of the detox diet. We’ve overindulged on sugar, are oozing alcohol from our very pores, and feel like a walking chemical disaster zone. So while it’s the perfect time to hit the raw juices and cut out chocolate for a few days, there’s actually a toxic battle being waged 365 days of the year that hemp can help us keep in order.

Our cells, just by breathing and consuming energy, create toxic waste called free radicals, as does exposure to chemicals, pollutants, and emotional stress. Free radicals are molecules that are missing an electron and, not content by their incomplete status, steal electrons from other proteins in the body, causing what’s known as oxidative stress. Left unchecked, this can damage our DNA, cause the body to perform poorly, and lead to the onset of age related diseases.

To counteract the damage by free radicals, the body produces antioxidants, which can also be found in most fruit, vegetables, nuts, and seeds.
Turns out the hemp plant is packed full of antioxidants, with studies showing our old friend cannabidiol to be a powerful source, even more so than vitamin C and E. The plant also contains other free radical fighters such as flavonoids.

Inflammation is a healthy biological process that forms part of our immune response to injury or infection. But it’s when that targeted inflammation turns into something more chronic that the problems can start. Indeed, long term, systemic inflammation is viewed as a precursor to a host of illnesses such as cancer, rheumatoid arthritis, and neurodegenerative diseases such as Alzheimer’s and Parkinson’s.
But the hemp plant can be a natural, drug-free way to reduce inflammation in the body. The main player in the piece once more is cannabidiol (CBD), with studies showing it to reduce the production of pro-inflammatory cytokines, the signalling proteins made by immune cells that are overproduced in patients with autoimmune diseases such as rheumatoid arthritis.
Scientists have also noted that CBD activates the Vanilloid receptor (TRPV-1), known to mediate pain perception, inflammation, and body temperature.

4. Hemp Helps Calm Your Mind and Protects the Brain

One of the reasons many people take CBD extracted from hemp is because they find it helps them with feelings of anxiety. This isn’t because they’re stoned — CBD doesn’t activate the same receptors in the brain as its psychoactive cousin, THC — but it is a partial agonist of the serotonin receptor 5HT1-A, interacting just enough to bring about an anti-anxiety effect.
Studies also suggest CBD’s ability to promote hippocampal neurogenesis (the part of the brain responsible for memory, emotion, and the autonomic nervous system) could explain why anxiety is reduced.

But it’s not just hemp’s anti-anxiety benefits that are a boost to our brains. CBD has even been declared a neuroprotectant by the U.S. government, and studies show the cannabinoid may slow the onset of Alzheimer’s by reducing neuroinflammation.

Studies show a diet rich in the essential fatty acid Omega 3 can lower the risk of heart attacks, reduces cholesterol, and is both anti-thrombotic (prevents blood clots) and anti-atherosclerotic (prevents the buildup of fatty deposits in your arteries).
Most studies on heart health talk of Omega 3 source from fish oil, but if you are vegetarian or concerned about polluted fish stocks, hemp seeds could provide a plant based alternative.

Okay, so you may be saying to yourself at this point, “I didn’t even know I had an endocannabinoid system, let alone that it might need balancing.”
You’re not alone. The endocannabinoid system was discovered in the 1990s and is basically a vast network of receptors and cannabis-like chemicals (endocannabinoids) in the body. Its purpose is to modulate functions such as sleep, appetite, mood, pain, and reproduction. Sometimes this system can get out of balance, with scientists believing this to be a contributing factor behind many illnesses.

7. Hemp Helps Get Your Hormones in Balance

If you’re a woman, you’ve probably experienced hormonal imbalances such as premenstrual syndrome (PMS) at some point in your life. One contributing factor is thought to be elevated levels of the hormone prolactin.

Gamma-linolenic acid (GLA), found in hemp seeds, produces prostaglandin E1, which studies show reduces the hormone disrupting effects of prolactin. In a study of women with PMS, taking one gram of essential fatty acids (including 210 mg of GLA) per day resulted in a significant reduction in symptoms.

8. Hemp Oil Is Good for Your Skin

Whether you’ve got problem skin conditions such as acne or eczema or you just want to prevent premature aging, the hemp plant can give your skin a boost from the inside and out.
Remember what we said previously about antioxidants? Our skin is bombarded on a daily basis by free radicals and toxins, so if our beauty basic is something that is both moisturizing and provides an antioxidant shield, it might just be the ultimate anti-ageing double whammy.

CBD is currently being touted as the ultimate, supercharged ingredient for problem skin due to its anti-inflammatory nature and anti-seborrheic effects — which basically means it prevents the overproduction of sebum in the skin commonly associated with conditions such as eczema, dermatitis, and acne.
So, there we have it. All hail the mighty hemp!

Who knew that it was such a health hero of a plant? It can literally work its magic from our heads to our toes, and from inside our cells through to the biggest organ of our body, the skin.
Whether using it as superfood supplement in the form of cold pressed hemp seed oil or taking hemp extract CBD oil to keep our health issues at bay, it is most certainly an ancient answer to many of our modern day woes.
Hemp — be humble no more. Join us with pride in a healthy new year.